So I'm a bit late on the whole Phil Robertson-being-a-good-Christian thing because I was busy carrying a 50-pound backpack through the mountains of southwest Texas. It is amazing just how fully the rocks and the skies proclaim the work of His hands. If you can't see God's face in his creation, then you have been blinded by the temporary riches of the world, because God made this world so that its enormity and majesty brings us to worship Him.

Anyway, that is not what I want to write about here. Phil Robertson of Duck Dynasty recently said in an interview that homosexuality is sinful, and when we live in a world that accepts homosexuality as OK, the line between what is sexually acceptable becomes blurred. We start to think beastiality is OK, that it is acceptable to be sleeping around with multiple women. And people in the LGBT community got upset, like what he said wasn't true.

But did you know that in Leviticus 18, many of these same detestable sexual practices are listed as sinful together? Likewise, many of the laws in our states' constitutions regarding homosexuality and bestiality are also listed together. And are you aware that in many cases, legalizing homosexual behavior also legalizes bestiality, and that these laws are being repealed? Yes this comes from one law being repealed, but they could have written in the bill to repeal that bestiality is still illegal--and yet the ones fighting for sexual freedom, for legal gay marriage, etc., are the ones pushing for bestiality to be legal.

The ones getting upset at what Phil said have lost a sense of what they are fighting for. They have lost vision, and as a result, have become embittered towards Christians or anyone else who believes something different from what they do. When we state our beliefs that homosexuality is sinful, we get attacked like we are in the wrong.

But when we say that it is wrong for a married man to sleep with another man's wife, why does no no one get mad at that? Biblically, both are sinful. In reality, any sex outside of God's covenant of marriage is sinful. And here is one of the arguments I see of people trying to peg Christians as intolerant. They claim that since Jesus never says explicitly that homosexuality is sinful that it is not, and any belief of this is a construct of our own twisted beliefs. But is the rest of the Bible not also just as valid as the words spoken by Jesus? In fact, "no prophecy of Scripture came about by the prophet's own interpretation of things. For prophecy never had its origin in the human will, but prophets, though human, spoke from God as they were carried along by the Holy Spirit." (2 Peter 1:20-21). But from this verse we hear about the Holy Spirit, who "searches all things, even the deep thoughts of God. For who knows a person's thoughts except their own Spirit within them?...This is what we speak, not in words taught by human wisdom but in words taught by the Spirit, explaining Spiritual realities with Spirit-taught words." (1 Corinthians 2:10, 14). So to say that homosexuality is OK because Jesus did not say it wasn't is wrong, because numerous other places in the Bible clearly say it is sinful.

But there is a reason why Jesus did not speak directly against homosexuality. Jesus didn't want to spend all day telling people what they couldn't do sexually, because this had already been said in Leviticus 18, but rather he cuts to the heart of this issue. He doesn't want us to live in chains to rules, but he wants us to live in freedom by his Spirit. And so he tells us that anyone who looks at another with lustful intent is already sinning. But this begs the question of what exactly is lust?

The most generic answer is that lust isstrong sexual desire with the intent to act. But this doesn't tell me much. What is intent to act? I can surely tell you that most men, when confessing and repenting of lust, have never said "I almost had sex with her." Because that is not true. In fact, most often, you hear men saying they lust when they look at a woman's body. But I think this, too, is a wrong interpretation, because this implies that the human body is inherently sinful. "Do not call anything impure that God has made clean." (Acts 10:15). A woman's body is not sinful; in fact it is beautiful, and when God created man and woman, they were both naked and felt no shame. Mind you, this is before sin existed in the world.

So where does this leave us with lust? Clearly, it is not that you plan on having sex with a woman when you lust, and it is not simply that one gazed upon a woman. The line must necessarily exist somewhere between these. My pastor, speaking on lust, put it this way: "You are free from the power of lust when you can see a beautiful woman and say, 'God, she is beautiful. Thank you for making beautiful women.' ". God wants our love, and he wants everything we do to be an act of worship. And this includes how we talk, how we work, and how we look at others. If I can look at a woman and be brought to worship, then I am not lusting. If I use the guise of worship as an excuse to look at a woman's body, then I am lusting, and thus I am sinning. If I look at a woman with no regard at all to God, then I am lusting, and thus I am sinning. And to the heart of this post, if a man looks at a man like I might look at a woman, he is sinning, and the same is true for women.

Homosexuality did not come from God, but from our own sinful nature. And so there is no way for a man to look at a man and thank God for it. So any time anyone looks at a member of the same sex in the way that God designed to be only between men and women, it is lust, and therefore it is sinful. So Jesus did not need to speak directly against homosexuality, because if we know God, then we know what God feels about this.

So really, I am speaking to two groups of people. First, to all Christians, I just want you to know why you are fighting for Phil Robertson at this point. Don't just blindly listen to the paparazzi and boycott the Duck Dynasty brand without knowing why. "Always be prepared to give an answer to everyone who asks you to give the reason for the hope that you have." (1 Peter 3:15). Know what they Bible has to say about homosexuality, and don't let the world change your beliefs. Sometimes, song lyrics put it best:

The foundation that we used to uphold

Now regarded as the madness of old

Every alteration made to the standard of truth

Is a nail in the coffin we hold

We embody everything they despise

Because they see us through degenerate eyes

So when they cast you down as intolerant filth

So know that the Bible is often seen as outdated, archaic, no longer holding the power that it did when it was written. But our God is unchanging, always loving, and we embody the Spirit of the one the world hates. So hold fast, hold true, and don't let the lies of the world tear you down. "Even if you should suffer for what is right, you are blessed. Do not fear their threats." (1 Peter 3:14).

Second, I want to speak to those condemning Christianity for being intolerant. I just want you to know that when we say you are sinning, it is not personal. Yes, we believe that homosexuality is sinful, and anyone who stands firm in their faith will not back down when called out for saying this. Anyone who is in Christ should be striving to "live such good lives among the pagans that, though they accuse you of doing wrong, they may see your good deeds and glorify God on the day he visits us." (1 Peter 1:12). You are not going to make Christians stop believing in what we believe. And also understand that when we call our sin as sin, we are not being intolerant. It is done out of love. If I see my brother sinning, it is my duty to call out his sin, so that he may repent and worship God without shame. And this is what we desire, for all to know and love God, because he loved us first. We are not hating you, we are wanting you to share in the joy that you don't know exists. God created us with the purpose to worship him, but Adam and Eve sinned against God, and this first sin separated all mankind from Him. But God didn't condemn us; he condemned our sin. He will punish our the sin in our souls with eternal fire, but he doesn't want to. He really doesn't. He created us to be with Him, and that is why he sent Jesus, so that he could die on the cross, condemning our sin for us. And if we believe in the sacrifice of Jesus, then we will be saved of the punishment for our sin.

And this is the reason why we should seek to be freed from sin, because we cannot serve two masters. When Jesus saves the adulterous woman from being stoned, he tells her to go and sin no more, because our sin prevents us from seeing God. So while Christians admit that we still live in sin, that we sin every day, we repent of this and worship God for being a God of love and forgiveness. And because we want everyone to know this new freedom and forgiveness, we want you to as well, but we know that sin is clouding your eyes and preventing you from seeing God's full glory.

So when we say you are sinning, know that we say this out of love, not intolerance. And ironically, it then is you who becomes intolerant of us. If you took the time to understand where our beliefs come from, you would know this. And before you get angry for me saying this, take a look at this photo, which is where I get this point from: 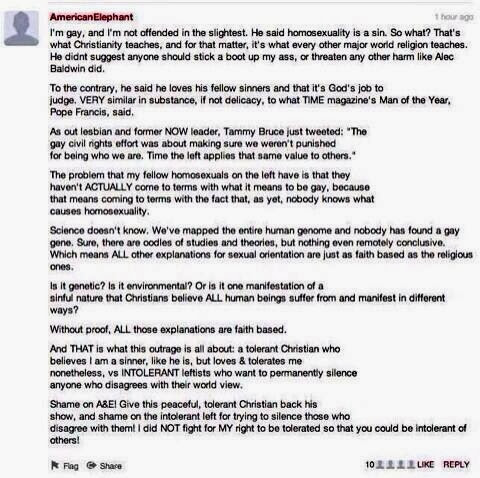